Markov Chain Monte Carlo (MCMC) is a common tool for sampling from complex distributions. In the machine learning and data science world, MCMC is sometimes used to get distributions over parameter variables for Bayesian models. Because MCMC methods can be easy to implement, it’s possible to apply these sampling procedures without understanding the bigger picture. This tutorial focuses on developing intuition for the basic idea underlying MCMC. Other resources include more techincal detail if you get hooked.

In general, MCMC algorithms allow you to sample from any target distribution . We typically don't know how to just draw samples tractably from . Otherwise we'd just sample from and observe its distribution, which is what we are trying to figure out in the first place! However, we can usually compute up to some normalizing constant , meaning that if , we can usually compute the numerator really quickly, even if computing is hard or slow.

I'll focus on one simple MCMC method, the Metropolis algorithm. Each iteration of Metropolis consists of two steps. In the first step, you make a proposal to move from state to state . You’re allowed to pick any proposal distribution that you want, so long as the probability of moving from to is equal to the probabilty of moving from to , which can be written , and so long as has some chance of moving to all non-zero regions of . In the second step, you accept the proposal with a probability defined by this seemingly odd rule:

When I first learned about Metropolis I found it quite surprising, especially since you can pick (basically) any proposal \(Q\) that you want. This procedure allows you to draw samples from any ? Why does it work?

Sampling from a Markov chain

This simple idea underlies Markov Chain Monte Carlo methods, including the Metropolis algorithm. In MCMC, you define a Markov chain with a distribution over states \(\pi\) that is equal to \(p^*\). Then you just draw samples from the chain to estimate \(p^*\).

The previous section explained how we can sample from some transition \(T\), in order to estimate some \(\pi\). This only works if we can find a \(T\) such that its stationary distribution \(\pi\) will be equal to \(p^*\), our target distribution. Expressed more mathematically, we need a \(T\) such that

You can prove that if some distribution satisfies detailed balance with respect to some \(T\), then it is the stationary distribution of \(T\). To me this seems very intuitive. If the probability mass going in to any given state is equal to the probability mass going out of any given state, the distribution will never change. The punchline is: if \(p^*\) satisfies detailed balance w.r.t. \(T\) then \(p^*\) is the stationary distribution of \(T\) and we can sample from \(T\) to sample from \(p*\).

Recall the somewhat mysterious Metropolis update rule, which proposes a change from \(x\) to \(x'\), denoted \(Q(x' \vert x)\), and accepts the proposal with probability

and denote each \(T\) as the product of two probabilities

Another way to express all this, is that if we use a symmetric proposal distribution \(Q\) and transition from \(x\) to \(x'\) with probability

we will eventually reach a stationary distribution \(\pi=p^*\). 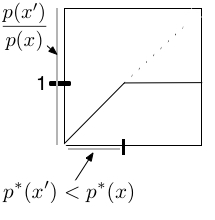 Thanks to Javier Burroni for helping me better understand some of the mathematical details behind MCMC and providing a detailed technical edit. Thanks to Nick Eubank and Andrew Drozdov for their help presenting the material in this post.